A Pain in the Derrière~Part Two

Us trying to alleviate the pressure on Grandpa’s pressure sore, and Grandpa trying to get his way…

“Why isn’t my control plugged in (wants us to raise the bed up which causes more pressure)?”

“This isn’t working for me (Bob trying to keep his head at 30 degrees)!”

“I have to be sitting up to read my book!””You’re such a kind man (said sarcastically to Bob) !”

And so on, and so forth…

A Pain in the Derrière~Part one

So, I’m all alone takin’ care of Grandpa this afternoon. After lunch he asked me if I was going to take a nap when he did. I said yes. This was around 3:00 p.m.

So I stretched out on the couch and put the news on in the background because I knew it would lull me to sleep.

At 4:30 I heard tapping on the floor (Grandpa uses his grabber to tap the floor to let us know he’s up).

I went in his room to get him up and he said, “I gave you an extra half hour of sleep.”

It was then I realized that he hadn’t been as gracious as he led me to believe.

He got a funny look on his face and proceeded to try and convince me that he had given me and extra half hour.

I beg to differ… Nice try Grandpa. Problem is, you can’t get out of the bed by yourself! 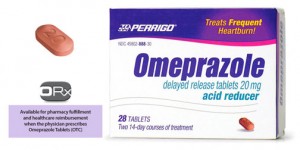 Only read this if you want a good laugh.

Jill: “You need your Omeprazole. We’ve been out of it for a couple of days and that’s why your stomach hurts.”

My husband Robert takes an Omeprozal pill and hands it to Grandpa, laying the box down on the table across from him.

Grandpa starts swinging his pill container to catch the edge of the box so he can get it near enough to him to grab.

Robert notices he’s trying to get the box. “What do you want Grandpa?” he says in a loud voice (so Grandpa could hear him).

Grandpa jumps in his wheel chair. “What are you you yelling at me for?” Grandpa says, getting angry.

“Because you can’t hear me.” Robert replies.

“Do you want him to read the insert?” Robert asks me.

“I don’t care,” I say, trying to concentrate on the work I am doing at the computer which is a few feet away.

Grandpa starts reading the drug insert. After a few minutes he says, “I don’t have chronic heartburn,” he says.

“Yes you do, Grandpa,” I said. “You’ve been on that drug for a long time.  You have acid reflux and you were without Omeprazole for two days, so now you have heartburn again.”

Mr. Hypochondriac continues his self diagnosis. “I don’t have chronic heartburn,” he says again.

“Do you read directions?” he asked.

“Why are you asking me that?” I replied

“Does this have to do with your medicine?” I ask, knowing full well it does.

“Well, the directions say you shouldn’t use that product if you don’t have chronic heart burn.”

I explain to him that his other medicine causes heart burn and that’s why he needs to take Omeprozol which he’s been on the whole time we’ve been taking care of him (three years). Every time we run out, he only lasts a couple of days and then he starts complaining of acid reflux – because he has “chronic heart burn.” I give up, I say to myself.

“Time to brush your teeth, Grandpa, and go to bed.”

While Robert is getting Grandpa ready for bed, the crazy argument continues.

“If I was Jill I would go to the doctor with the instructions and tell him he is wrong,” Grandpa says, trying to get one last lick in before bedtime…

“If you were Jill, you could wear a dress,” Robert replied.

My stomach hurts now. Oddly enough after a little health episode of my own in January, I was prescribed Omeprazole. I don’t take it however. I don’t have chronic heart burn. But I’m sure burning tonight!

It isn’t often that we get a chance to repay our parents for all that they’ve done for us.

Sometimes Grandpa get’s on a kick that real Christianity is caring for orphans and widows and he wants to start a non-profit to minister to them (James 1:27), until I remind him that he’s a widower and I already have my hands full.

Somehow I don’t think my diaper changes were as  profound.

After a relative we ha 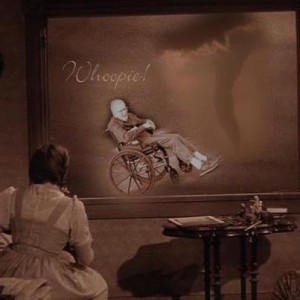 ven’t heard from for quite sometime expressed concern that Grandpa might be in danger today from the erratic weather, my husband said I ought to post a picture of Grandpa’s current status! Ha ha. Yes, this was Robert’s idea. Blame him!