So Grandpa wakes me up at 2:00 in the morning and says he’s having a heart attack. He’s points to his gallbladder.

“That’s not where your heart is,” I inform him.

“Awe bunk,” he says. Robert hears the commotion and gets up to go to the bathroom.

“Tell him where his heart is,” I say. He shows him.

“You had too much rich food for your birthday, Grandpa – sirloin steak, ice cream and half a Willie Wonka chocolate bar.”

Don’t Mess With the Mess Hall!

Jill:”You’ve been leaving one in the dish every day for the last week. I’m only giving you two.”

If you want three prunes, you’d better eat them!”

Then he says, “That would make you the first lady.”

We all agreed that once a year there should be a day when politicians can only use sign language. We can see them all gesturing: gimme, gimme, gimme!

A View of God’s Faithfulness 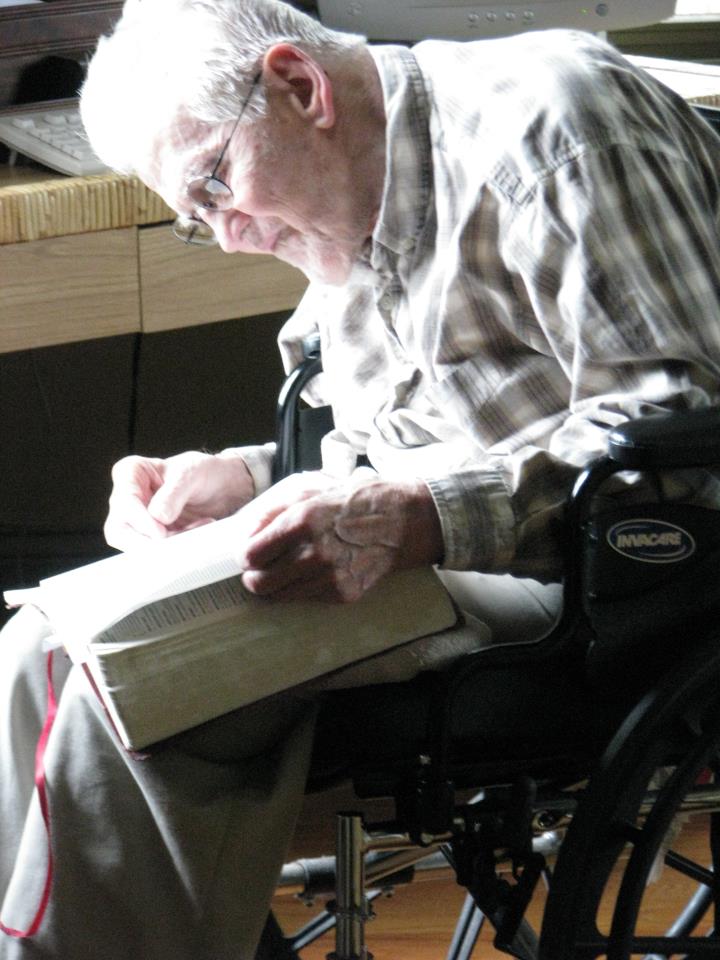 “I love my bedroom,” Grandpa said.

While he was in the nursing home, he prayed that he would have a room someday all by himself where he could write. And he asked for a room with a view, too. His bedroom has windows on three sides facing north, south, and east. So, technically this move is all a result of Grandpa’s prayers – not to mention mine. Sometimes we have to wait a long time, but God is faithful!

Today when I walked in Grandpa’s house today it was pretty warm. The air conditioning off. We’ve been turning it off at night lately because Grandpa gets so cold. But Eric had  dressed him in a flannel shirt which we often do because he’s sitting around an air conditioned house all day. Eric was totally oblivious to the fact that it was 80 degrees in the house. Grandpa was real sleepy. I wonder why? I changed him into a short sleeve shirt and he was a lot more comfortable. There’s something in the air, though. I’m really sleepy, too . Have been all day.

After almost two years of caring for my 90-year-old father with Parkinson’s, I’m starting to wonder what drug he was given that caused him to totally zone out and land him in the hospital, dehydrated and so drugged up that the hospital doctor thought he wouldn’t come out of it for ten days.  It didn’t really dawn on me until lately that he was totally abused or is this a common practice in nursing homes? http://newoldage.blogs.nytimes.com/2011/02/15/clearing-the-fog-in-nursing-homes/

It was this incident that has changed my family’s life forever. We’re blessed to be taking care of Grandpa at home, but it has come with a great price. I want to know what drug he was given and WHY? That one act has altered my life and the lives of six other people, especially Grandpa’s. Things grow curiouser and curiouser. 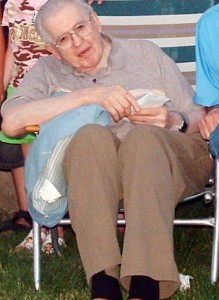 Grandpa during his nursing home days. 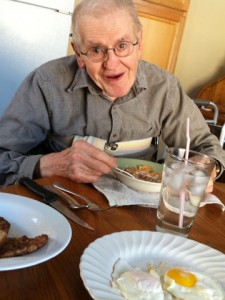 Grandpa at home after being taken off of Benzatropine which gave him dementia.