The Dreaded “Divide Your Food In Half Game” 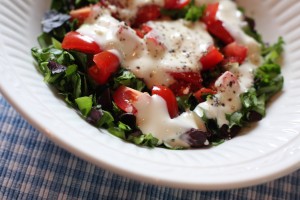 On a scale of one to ten, ten being the worst thing that could ever happen to you, this is basically a big fat zero, zip, zilch! But, nonetheless, it’s aggravating, and something every caregiver of an elderly family member will experience sooner or later. The mealtime scenario goes something like this:

I prepare a homemade turkey burger patty for Grandpa. I fry it up in a pan, smother it with mushrooms sautéed in butter, and place it on a piece of whole wheat bread slathered with Hellman’s mayonnaise. I sprinkle grated cheddar and Italian cheeses on top of it and melt it in the microwave.

I purposely give Grandpa only one piece of bread so he doesn’t become overwhelmed by the sight of a “full plate.” He rarely finishes his evening meals anymore, so I’ve scaled back on portion size so the visual food cue doesn’t knock him for a loop!

As I place the plate in front of him, I tell him it’s a mushroom burger with melted cheese (sometimes he doesn’t know whether he’s eating chicken, pork or beef, so it helps to tell him ahead of time before he asks, “What is this?”).

“I love mushrooms!” he exclaims.

Grandpa digs in, which in laymen terms means he uses his spoon instead of his fork to consume the bite-sized pieces I’ve cut his food into so that he doesn’t choke.

I continue cooking up the burgers for the rest of the family.

Really? I think to myself. Sides?

I look over at his plate. Sure enough, he’s divided his food in half–again!

“You really have everything you need,” I say, thinking about the protein, fruits and vegetables I have served him throughout the day. The truth is, I know he’s probably not going to finish the food I’ve set before him, so why add to it!

I look at his half consumed burger. Serving a smaller portion backfires tonight. He cuts the half serving in half again.

Feeling guilty about the lack of variety, namely something colorful and green, I ask, “Do you want a salad, Grandpa?”

“No.” he acquiesces. But I can tell by the way he said “no” that he doesn’t mean it. Although Grandpa is not big on vegetables, he does like salad.

So I go to the refrigerator and pull out a variety pack of spring lettuces. I place a handful in a serving bowl, and with a pair of kitchen scissors I snip them into smaller bite-sized pieces. I slice each cherry tomato in quarters, and halves again. I add them to the lettuce mix and then I spoon a large dollop of blue cheese salad dressing over the top and stir it all around.

I place the colorful, flavorful, denture-friendly salad next to his plate.

I turn around to clean off the counter and put everything away in the refrigerator when I hear the dreaded mealtime proclamation: “I’m full!”

Half of his burger is left . . . the salad goes untouched. Surely I knew that was going to happen? Even though I vow to never be a short order cook, I’m obviously mistaken for one tonight!

Food, glorious food! It’s an obsession with older folks. They can’t live with it, and they can’t live without it, but somehow they manage to dissect it into oblivion or push half of it aside as if they are “breatharians,” living solely on air.

It makes me wonder how much food is tossed into the garbage at assisted care facilities and nursing homes. Actually Grandpa lived in both types of facilities at one time, and I know for a fact that unconsumed food is a huge waste–every day.

At least here at home, I can pull that half-eaten burger out of the fridge and serve it at lunchtime. But as far as the salad goes, it’s wasted–wasted food, wasted time, but I hope not wasted effort.

I try to please, and I guess that’s all that counts.

Maybe next time Grandpa says no, I’ll take him at his word, or maybe not. Sometimes that can prove to be dangerous, like today. But in the grand scheme of things–on a scale of one to ten–it just doesn’t matter. I tend to lean in that direction.

One thing is for sure! In this house, what goes around comes around–leftovers and all. In my experience, feeding Grandpa isn’t really much different than feeding a toddler, except I thought I was done with that stage . . .

I guess the joke’s on me!