Wranglin’ with the Wash 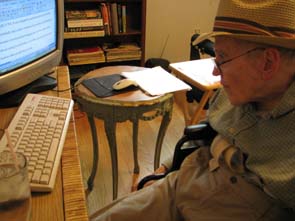 Grandpa writing on his book about the nursing home

“I’m having a hard time beginning this entry,” I told Grandpa.

“Yes, if you can think of anything, I’d appreciate it,” I replied.

A ghost writer, ha! That’s a good one.  In a sense, Grandpa has been a ghost writer ever since he came home because all my subject matter originates with him.  He’s a ghost writer, all right – once removed. There’s never a shortage of material, and although it may not be the most popular subject in the world – the trials and tribulations of taking care of an elderly parent – it is an opportunity to record a legacy for my children and stay somewhat sane through the process of journaling.

For instance, this post is about the terrible time we’ve had keeping Grandpa looking presentable. It’s much harder than you would imagine. He came home from the nursing home with a limited number of dress pants and khakis, and after a year of washing, they don’t launder well. I’ve added a few more khakis to his wardrobe, purchased from the Goodwill, but they were already worn to begin with, so lately, Grandpa has been looking a little disheveled, especially from the waist down.

To keep Grandpa smelling fresh, we wash his clothes daily, and the sad reality is, we don’t have the energy to iron them too. Besides all of the other duties we perform for Grandpa such as showering him, changing him three times a day, helping him get where he needs to go, and cooking three square meals, ironing doesn’t fall under the category of the urgent.

Anyway, let’s be realistic. We’re not living in the days of June Cleaver or Alice from the Brady Bunch (although having a live-in maid would defiantly solve the problem). No, we’re living in the days of permanent press and wrinkle-free cycles, so you really have to ignore standard operating procedures to achieve maximum wrinkle-free results by cramming clean clothes into laundry baskets and leaving them sitting around for a while so they can wrinkle again.

Because I don’t live at Grandpa’s, a lot of laundry goes undetected by my mommy radar. Most mothers possess a sixth sense regarding  laundry that needs to be taken out of the dryer or promptly shook out and hung up from the basket. I’m not really sure what the issue is here. It could be because the washer and dryer are in the basement and the laundry isn’t being brought up on a daily basis, but the more I think about it, it’s probably the fact that the buzzer is broken on the dryer. Come to think of it, I haven’t heard it go off since we’ve been taking care of Grandpa. The truth be told, out of sight – out of mind. I’m out of sync with the wash!

If Grandpa’s pants were removed from the dryer immediately and hung on a hanger, we could possibly eliminate the need for ironing all together. But since we don’t know when the clothes are done drying, and the dryer is not likely to be fixed any time soon, we’ll just have to buy a few more pairs of $10.00 Wranglers from Wal-Mart.

As with most of the obstacles we’ve encountered, we accidentally stumbled onto a solution for this new challenge. Grandpa asked for a pair of blue jeans for his birthday, so Eric purchased what is supposedly his very first pair ever from Wal-Mart. When I saw Grandpa in his Wranglers, I said, “EUREKA! Why didn’t we think of that sooner?” I mean, you really have to do a lot to mess up a pair of blue jeans. For the most part, they will only get softer and better looking the more we wash them.

There are no words to describe how cute and wrinkle-free Grandpa looks in his Wranglers. A picture will have to do, only I’ll have to wait to take one because Grandpa’s Wranglers are in the wash. I have been informed by certain members of the family (who wish to remain anonymous), that it takes two days for the laundry to be brought up from the dark abyss. No wranglin’ about that!