Talk Therapy or Banishing the Doldrums! 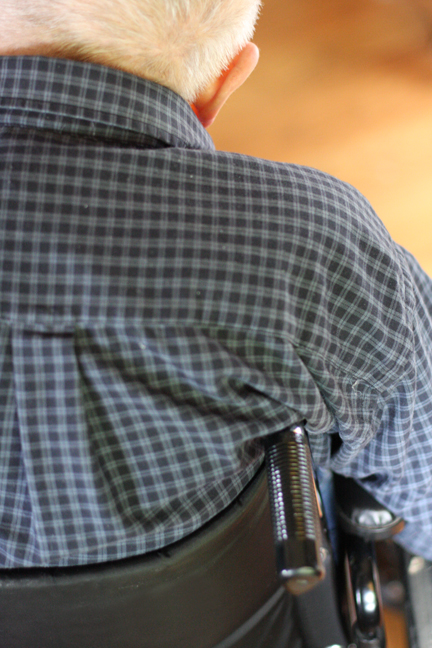 You know how a suicidal person tries to jump off a bridge and a total stranger grabs them, pulls them back, and yells “No, no, don’t jump!” Well, today, I single-handedly saved Grandpa from going over the edge of his own mind!

When I walked in the back door this afternoon after running a couple of errands, Elizabeth warned me, “Go away, go away! Don’t talk to Grandpa!” She whispered behind his back that he had just gone on a long dissertation about not wanting to eat lunch, and she motioned for me to leave the room! The problem is, I was already standing near Grandpa when she told me this, and I could see he was not happy!

“That’s okay, no one wants to feed you,” I replied sympathetically.

The look on his face told me he was ready to call it quits, throw in the towel, kick the bucket. In other words, he wanted to die (again)! The problem is, he has no way to make this physically happen, except by refusing to eat or drink which is a really painful way to go, so he never lasts very long at trying the self-deprivation method. Grandpa loves food too much!

Even though I’ve heard this “death” jargon stuff before, especially when cabin fever sets in, which it has, elderly folks love to say “I want to die” at least once or twice a year, and even every other week when they are sick and tired of being old. Unfortunately, Grandpa cannot come up with an effective way to make a “Grand Exit” permanent. He’s incapable of doing any harm to himself. He’s too much of a sissy.

Well, I put my arm around Grandpa and told him he probably just needed more sleep. “Remember the last time you got like this, Grandpa? You are just really tired.”

He nodded in agreement.

I also told him, “Grandpa, you think too much. You really need to relax!”

And remember that revelation he had yesterday? The one where he said he was really blessed? Well, the winter doldrums have got him. That’s all it is, and I told him so!

“You have the doldrums.”

“You have the doldrums,” I shouted in his ear.

“Well, just eat,” I told him, “and you can have a big nap. You’ll feel much better when you wake up.”

Well, pretty soon he started to come around and before you know it, he ate a whole turkey sandwich, some chips, and a bowl of fruit. And tonight, he ate an entire Sloppy Joe sandwich with cheese melted on top and a potato patty on the side.

Grandpa, loves to eat, and that’s why he’ll never be able to do himself in.

Later, after the “episode” was over, I thought I would look online to see what you say to someone who wants to die. So I laughed when I read that a caregiver should use “talk therapy.” That’s exactly what I had to do. I had to talk Grandpa back from the edge of his negative thinking. But you know what? I really didn’t do it single-handedly. The Lord gave me the words, and He made Grandpa receptive to what I was saying because I didn’t react to his “nonsense”– something I specifically prayed for today with Robert.

Grandpa is feeble and old, and he really can’t pull the punches he did when he was a younger man.

But I’ll tell you something, I’m always going to try to save him from jumping off the bridge of life!

As  Jesus said: “Truly, truly, I say to you, when you were young, you used to dress yourself and walk wherever you wanted, but when you are old, you will stretch out your hands, and another will dress you and carry you where you do not want to go.”  John 21:18

Today, I had had to take Grandpa somewhere He didn’t want to go . . . back to life, and life more abundant!