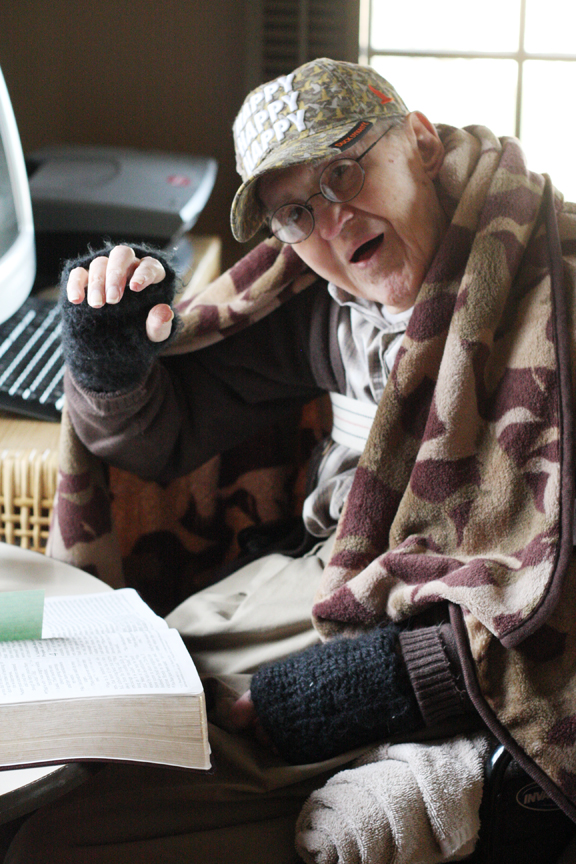 “You’re always there when I need you,” Grandpa said as I put his Duck Dynasty blanket around his shoulders.

“Triply blessed,” Grandpa, I replied. “Me, the Lord, and Robert!”

Let’s give credit where credit is due! I wouldn’t be able to care for Grandpa – at all, if it weren’t for Robert!

And we wouldn’t be able to care for this feisty little old man this long if it weren’t for the Lord and the help of our kids! It takes a family to care for a Grandpa.

I’ll tell you one thing, I’m so thankful for the Lord’s faithfulness to answer my prayers of total frustration!

Grandpa is a blessed man, indeed! 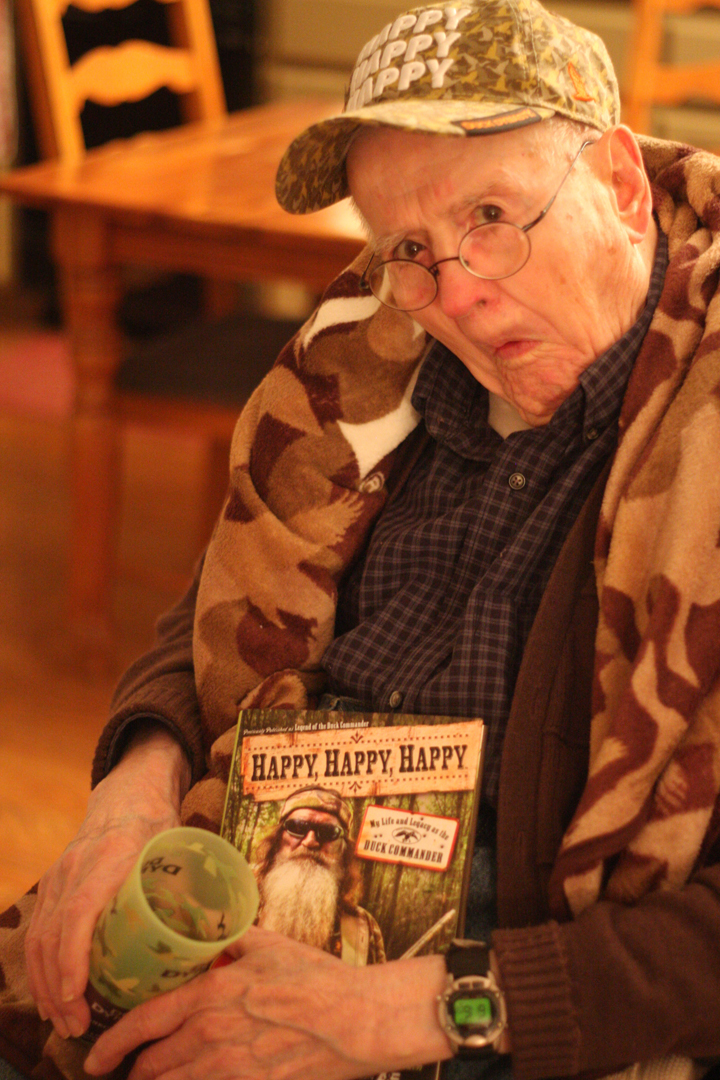 The many faces of Grandpa. He is a real character.

Wednesday night is my night off. What from you might ask? From giving Grandpa his dinner in the kitchen. My husband, Robert, goes to Bible study on Wednesday nights – one of two weekly breaks from the 24/7 “Grandpa grind,” the other Sunday morning. Our daughters also help out in the church nursery, so that leaves me all alone with Grandpa. Oh, joy!

Now, I want you to understand something, I love Grandpa, but I’m not very talkative when I’m tired, which is usually what I’m feeling in the evening knowing that I have to make dinner for someone who will probably turn up his nose at what I’ve made. It’s a little disconcerting with the price of food (not to mention my time and energy) how Grandpa can pick at a plate he would easily finish if he had been eating with the whole family.

Needless to say, it wears me out to play food games, so that’s why I came up with a great idea a while ago! On Wednesday nights, Grandpa eats in his room while he watches TV. I started this arrangement last fall when Robert’s new Bible study classes started up again.

But guess what? Grandpa does not like this arrangement–at all (you’re not surprised are you)!

Well, I wasn’t surprised either when I peeked down the hallway tonight and saw him looking at his watch. It was only 5:30 PM. Dinner is served at 7:00. PM. As he wheeled back and forth in front of his bedroom door, killing time, I thought to myself, He’s going to bellyache about having to eat in his room all by himself. I just know it!

Go ahead . . . call it self-fulfilled prophecy, caregiver’s intuition or a chapter on caregiver burnout from “Caregiving for Idiots,” but I knew he was going to gripe tonight even though a piece of paper with Philippians 2:14 is taped to his bedroom wall: “Do all things without complaining. . .”

Sure enough, when I brought his food down to him and pulled his nice little round table over in front of the TV, and placed a hot plate of spaghetti in front of him, smothered with Parmesan cheese (he loves spaghetti, he loves Parmesan cheese), he turned up his nose and jumped a bit in his wheelchair. Then he put on his best “feelin’ sorry for myself face” and wailed, “I’ve got to get out of here!”

“It’s Wednesday night, Dad,” I said emphatically. “Wednesday nights you eat in your room. This is something you can do for me!” I said, my voice rising slightly. . .

“Why are we fighting?” he said all agitated as if he didn’t know.

“You started it! ” I shot back. Then I added, “Listen, Dad, you live like a king! You only have to do this once a week. You have such a beautiful room. I wish I could just sit in my room and watch TV and have my dinner brought to me. You need to look at what you have, instead of what you don’t have. You’re so blessed!”

Grandpa looks down. He has a way of avoiding my eyes when he’s getting lectured, and he knows I’m right!

Anyone in my position would need a little time off once a week – “off” being the operative word.

Caregivers have to make time for themselves even if it is a bit hard on their loved ones. One night off a week is not too much to ask from someone who is capable of entertaining himself. He has cable and barely takes advantage of it.

Elderly parents have a way of wrapping you around their little finger and making it seem as if their world begins and ends with you–their adult children. Sometimes you feel used. The lyrics of an old song so apply:

Grandpa really has “no idea” what it takes to care for him, day in and day out. So once in a while, my husband and I have to apply tough love in order to maintain our sanity.

Well enough about my Grandpa journey for tonight. I really wanted to relax a little, but I got carried away writing, and now it’s 10:30 PM. So much for my night off.

Gerald Hale said on Facebook:  It is worth the pain and suffering you and Robert go through in caring for Grandpa. By being his care givers, you all know how well he is being cared for. Should he be in a nursing home all of you would probably be miserable. May you all be evermore blessed and may Grandpa feel the love you all have for him as you do what God says do……..caring for your elderly dad.

I’m Not His Wife!

This is all because he woke up on the wrong side of the bed yesterday and made a demand that just wasn’t going to be fulfilled. First thing he did was to tell Bob that he wanted to go to a “good” nursing home.

The man who wrote a book called: Trapped in a Nursing Home: What They’re Really Like and Why You Should Avoid Them at All Costs!

We’ve had this request at least two times in four years of taking care of dad. I have no idea what prompted it other than I had a publishing deadline to meet and Grandpa’s radar was out.

It’s really hard when someone throws the Bible at you, but you know what, I’ve become pretty good at throwing it back!

I’m still recovering from Eric and Hannah’s wedding, and The Hopeful Farm Foundation Mother’s Retreat when Grandpa yelled down the hallway from his bedroom:

“Hey, Jill, are we going out sometime?”

“Yes, Grandpa,” I yelled back.

As soon as I recover from the last six months of my life, I thought to myself . . . (personally, I could stay home forever).

But really,where do you take a 93 year old man just for fun?

Wesley Village in Wilmore, KY of course. This performance looks right up Grandpa’s alley: “Smiling Memories and Melodies of 1920” Direct from Cypress, TX, John Korsgaard returns with another magical musical presentation of popular tunes and celebrities of the past.

But it’s not until the 28th. It will give Grandpa something to look forward to!

I don’t know why lately, but Grandpa makes me laugh when I should get mad. Must be God’s grace for another of life’s “trying” moments here at the “Just Keep ‘Em Happy Old Folks Home!”

For instance, my child (Grandpa) did not get a good night’s sleep due to a sore on his toe. I gave him two Tylenol last night, and re-tucked him in in the wee hours of the morning.

Later around 9:00 a.m. when we went to get him up and I checked on his toe again, he asked me to call the paramedics because he said he was having leg spasms for the last three hours. I just wanted to laugh, but I didn’t let on…

He looked just fine, so Bob and I proceeded with the usual morning routine because He didn’t seem to be ailing – at all.

When Bob had him dressed and ready to go, he wheeled him out to breakfast, but Grandpa wanted to skip his bran cereal and go back to bed. Problem is, he needs his medicine and can’t take it on an empty stomach.

Me to Grandpa: “If you can complain this much, you’ve got energy.”

He keeps up his complaining, but it falls on deaf ears…

“If you would just speed up,” I tell him, “you’d be done with your breakfast in a few minutes. Besides, I’ve seen you in worse condition.”

“Oh, what you do you know!” he says waving his hand at me.

I know you, Grandpa! I think to myself, and today you’re a real “Drama Queen!”

“Do I have to brush my teeth,” he begs (usually he has to brush his teeth after breakfast and drink a glass of water before he lays down for a nap, but maybe he should skip it today).

“Well?” he asks staring at me while I tried to figure out whether I should let him off the hook or not.

“Sure, go ahead and take your nap right away, ” I acquiesce. I decided to give him a break…He can attend to his dental hygiene when he gets up.

Truth is, Grandpa’s pooped… and I’m not looking for trouble.

Once more, mercy triumphs over the little gray-haired man trying to pick a fight!

You know, my husband and I needed some outside support a few weeks ago because Grandpa’s care has become even more challenging, so we called in the “big guns” and asked our Pastor to come over.

Over a down-home lunch of pulled pork, slaw and Kentucky Derby Pie, with coffee of course, we poured out our hearts and sought his advice for enduring the race that has been set before us – namely the “The Grandpa Marathon.”

When I had originally asked Pastor Steve if he would be willing to come over and talk with us, he made the comment that every family has to decide what they are going to do, i.e. when they might have to put their parent in the nursing home.

I laughed, and said. “No, Pastor Steve, you don’t understand. We took Grandpa out of the nursing home!” They couldn’t keep up with him . . .

Anyway, he was so gracious to come over and listen. A pastor who has the time to really listen these days is a rarity, but our Pastor has been around for a few years, ministered to all kinds of people in all kinds of situations, and God has given him the ability to discern human nature pretty well.

One of the amazing things he said, and something I know I had heard before, but forgot was this: the spirit doesn’t grow old. What Grandpa was like as  a younger man is what he is now – plus one other major factor: Grandpa’s heart is redeemed!

Even though he can tend toward self pity and manipulation every now and then, especially when he wants things his way (like the day he asked me to feed him breakfast so he could write on his book), Grandpa is a new man compared to the one I grew up with. More than not, Grandpa relies on the Lord to get him through and before Pastor Steve left, he asked him what the good word for the day was.  Grandpa said, “His will be done!” So pastor Steve prayed with Grandpa that His perfect will will be done.

And you know what? I cling to those words. We’re going though more changes with Grandpa and I’m relying on the Lord to get us through. I need to know that God’s perfect will is being done for my family.

He also prayed that our house would be a house of prayer. There are so many variables when you’re taking care of an elderly person. How important it is for my husband to remember to pray at the beginning of each new day. We never know what it may hold.

Come to think of it, do any of us know what a day may hold?